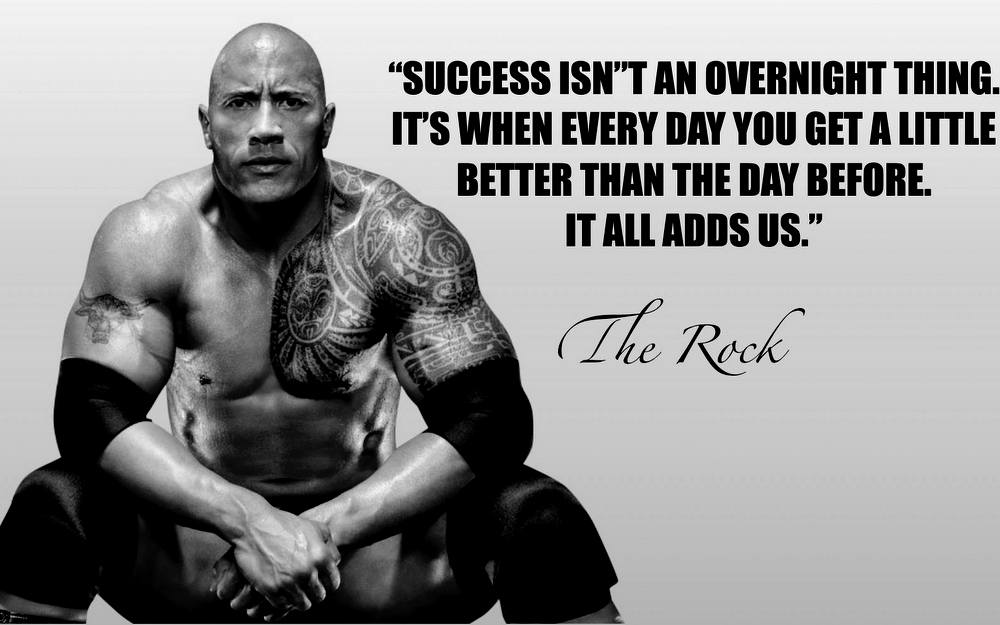 Are you between a rock and a hard place? Then Dwayne Johnson, AKA The Rock has a story for you.

In Dwayne’s early years, his dad, Rocky Johnson attempted to make it as a wrestler, which pushed their family towards bankruptcy. Dwayne remembers, at 14, seeing his mother’s car being repossessed and then, a week later, being evicted from their house:

“We come home, and there’s a padlock on the door and an eviction notice. My mom is bawling. She just started crying and breaking down. ‘Where are we going to live? What are we going to do?”

“It broke my heart. I remember saying to myself, ‘I will do anything and everything I possibly can to make sure we never get evicted again.’”

Over the next 5 years Dwayne decided to focus his athletic talent and work ethic towards his dream of being a professional footballer.

Getting a full scholarship with the University of Miami to play defensive tackle, he made it on to the Miami Hurricane National Championship team. Then, at 19 years old, disaster struck, with a back injury putting him out of contention.

Dejected, he returned to Canada to play for the Canadian Football League’s Calgary Stampeders, but only made it to the practice team. He lived in a two-bed apartment with three of his football teammates.

“Four of us were in a truck, and we needed mattresses to sleep on… back in this dumpster, behind this hourly-rates motel, I found the mattress that had the least amount of semen and blood on it and took that one. I bought a sheet set and a lot of Lysol. It was something.”

Then, he was cut from that team too. As he remembers, “There was no injury. It’s just, ‘That’s it. You’re not good enough.”

Then, his girlfriend dumped him. Dwayne said, “The dreams I had, theyre dashed. There is no more football. My relationship was crushed. That was my absolute worst time.”

That absolute low point is when he decided to take full responsibility for his future success, saying to himself: “If you really want to do something, you’ll find a way. If you don’t, you’ll find an excuse.”

Dwayne decided to start his own business. As a reminder of his starting point, he named his company ‘Seven Bucks Productions’.

He began to promote himself as a wrestler with small-time matches in flea markets, earning $40 a night, until he made it into the WWE where he took on the name “The Rock”. From there, over the next five years he grew into the biggest superstar in professional wrestling.

Then, in 2000, he was invited to host Saturday Night Live. His reaction? “Bring it on! I get to wear a dress and do comedy? Sure, easy.”

That led to his first movie role in 2001, as the Scorpion King in “The Mummy Returns”. He only had one two-word line “Haku Machente!” in the entire film, but he practiced them again and again, despite being sick through the entire shoot in Morocco. As he remembers, “I get a call from my agent, and he says, ‘Hey, they’re watching the dailies of what they’re shooting, and they want to make a movie just off your character.’ And I said ‘Great’, as I leaned over to vomit more.”

That first film led to a decade of rising roles, leading to him being the highest grossing actor in Hollywood in 2013 with his films grossing $1.3 billion worldwide.

Throughout this time, Dwayne has continued to build Seven Bucks Productions. The latest project? HBO’s 2016 Documentaries’ “Rock and a Hard Place”, giving young people a second chance in life, inspired by Dwayne’s story.

What has driven all of Dwayne’s successes has been his ongoing commitment to being the “hardest working person in the room”? Today, at 43 years old, he still gets up at 4am to stay in shape. His motivation? “I like to use the hard times of the past to motivate me today.”

What is driving you? If you’re between a rock and a hard place, look at them not as the cause of your present challenges, but the drivers to your future success.

And don’t expect a door or window to open. If you don’t see a door, make your own.

As Dwayne says, “I grew up where, when a door closed, a window didn’t open. The only thing I had was cracks. I’d do everything to get through those cracks — scratch, claw, bite, push, bleed. Now the opportunity is here. The door is wide open and it’s as big as a garage.”

It’s your turn now. So get out there. Rock the world.

Jim Carrey: A Story of What’s possible
Stop Putting Yourself Down and Start Now
To Top