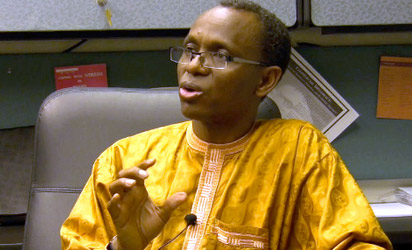 Like him or hate him,  the Entrepreneurial Governor, the enigmatic former Minister of the Federal Capital Territory, now Governor of Kaduna State, Nasir el-Rufai is a transformational leader. First, El-Rufai had served as Director-General of the Bureau for Public Enterprises and also as Secretary of National Council on Privatisation. His elevation and appointment as Minister of the FCT was a testament to the fact that he had faithfully and dutifully performed in his former role. The then President Obasanjo saw in him a man who could be relied upon to deliver when given a difficult task. So it wasn’t a reward but a call to take on more responsibility having delivered on an earlier task. Typical of El-Rufai, that was why he challenged and threatened to expose the senators who wanted him to pay bribe for his confirmation as minister.

At the time of El-Rufai’s appointment as minister of the FCT, it was clear that Abuja had derailed from the original master plan designed for the FCT. Once he took office, he set about his role with an infectious enthusiasm, energy and single-mindedness that you would think there was no tomorrow. He was a man in a hurry to return Abuja to the original plan and to transform the city into one of the world’s most modern cities in terms of infrastructure, architecture and aesthetics. You will only appreciate the transformation that occurred in Abuja if you were here before and after El-Rufai served as minister of the FCT. It was clear that successive FCT ministers have found it impossible to fill the big shoes that he left behind after leaving office. The transformation that occurred in the FCT should be a subject of study in transformational leadership in business schools because it was unprecedented.

What are the secrets of El-Rufai’s outstanding performances and what drives him to do what he does and the way he goes about achieving them? When he threw his hat in the ring to contest for the office of the governor of Kaduna state, it was clear that he had an agenda to replicate a similar success and transform Kaduna into Nigeria’s best city and the new haven for investment. Let us consider the top 10 success principles that have made Nasir El-Rufai the wonder transformer.

1. Boldness. The most distinguishing feature of El-Rufai is his boldness and the confidence with which he faces his work. When he set out to transform Abuja, it was clear that he would step on the toes of the high and mighty in the country. It didn’t matter who you were or whether you were the cousin or best friend of the president. It didn’t matter if you were a senator or a member of the House of Representatives. It didn’t matter whether you were highly placed in society or low, El-Rufai is not known to be a respecter of persons who flouted rules and regulations. It is on record that he was on ground during the demolition of houses belonging to the senate president, PDP chairman, IGP, etc. You may look at him and feel you can intimidate him because of his diminutive stature but it appears that his size is his greatest asset. Everyone, his friends and foes inclusive, understands that this man has the mind of steel and knows no fear. In an era when sycophancy and boot-licking are the common qualities of politicians, this singular quality of character clearly differentiated him from other politicians who are usually men pleasers.

2. Hard-work. You needed to be in the FCT when El-Rufai was the minister to see that he was involved in everything that happened under his watch. People who worked with him can attest to the fact that he worked harder than everyone else. He engaged his staff and contractors and was the first to be on the site. He wasn’t throwing wild parties and traveling the world when he should be home getting his hands dirty. He clearly represented the ideal that a leader has no right to demand from people that which he himself is unwilling to give. It was impossible to survive a day with this man if you weren’t ready to put in time and work to get things done. One of El-Rufai’s driving philosophies is that hard work does not kill but laziness does.

3. Focus. Once it was clear what he wanted to achieve, he set about it with single-mindedness and focus. He understood that a lack of focus or broken focus is the main reason why many leaders fail. Being a visionary leader, he knew what needed to be done, understood that he had only a limited time and set his mind to accomplish his tasks. He didn’t beat about the bush or engage in acts that didn’t support his vision of birthing a modern city. El-Rufai is not known to start any project that didn’t have time-frame and didn’t embark on any white-elephant project. He cancelled contracts where contractors had unduly delayed and re-awarded it to more serious people who understood the essence of time. His 20:20 vision clearly differentiates him as one of the most outstanding leaders of our generation.

4. Honesty. It is hard to find honest leaders who will stand by their words no matter what. It is highly unlikely that he would have dared to demolish the houses of the rich and mighty if his hands were soiled. It is on record that he refused to succumb to the demands of senators for gratification prior to his confirmation as minister. No other minister in recent history openly confronted senators and refused to bow to their whims and caprices.

5. Excellence. El-Rufai’s quest for excellence is evident in the way he embarked on his infrastructural revolution in the FCT. Under his watch as FCT minister, Abuja was clean and street hawking was forbidden. All the refuse dumps were cleared and jobs were created for people who ensured that the streets were kept clean. Abuja didn’t seem like a part of Nigeria because of its beauty and wonderful landscaping that were introduced by El-Rufai.

6. Thinking-outside-the-box. El-Rufai strongly believes that you cannot solve problems using the same solutions that created them in the first place. So in achieving his goal of giving the FCT a new and befitting look, he radically introduced new approaches and methods. El-Rufai didn’t white-wash the roads and buildings, he recreated them and built a city that will endure. Face-lifting the roads would have been easier and probably cheaper but being a man that is concerned more with his legacy than short-term gains, he forbade shoddy jobs that will last only a few years.

7. Teamwork. El-Rufai clearly understands that a leader is only as good as the people he surrounds himself with. So as FCT minister, he chose a set of people who understood his vision and supported him in delivering on his promise to change the city. As a leader, it was impossible to be everywhere at the same time, so he only engaged people who he trusted to spread the seeds of his vision. He welcomed superior arguments and thoughts and wasn’t afraid if his team member proffered a solution better than his own. In fact, the only reason you would be a member of his team is if you have the capacity to think and deliver

8. Hands-on approach. Although he delegated tasks to team members, he didn’t abscond or disappear. Yes, he delegated but he was also on ground to supervise and ensure that projects didn’t derail from the plan. Because he was always on ground, his team members were kept on their toes and didn’t cut corners. Being a professional and successful Quantity Surveyor also helped because you couldn’t fool him with difficult architectural drawings.

9. Sacrifice. No leader can achieve enduring success without sacrifice. So if he needed to work the whole night and day to get the results he wanted, El-Rufai was ready to put in the time. It couldn’t have been easy to achieve those kind of results without a measure of sacrifice. Leadership without sacrifice is only lip service and amounts to nothing. It is on record that when he left office as minister, he had grown more grey hairs due to many sleepless nights and days without food.

10. Planning. El-Rufai exemplifies a life that is committed to planning ahead. This is the reason why when he takes up a challenge, he doesn’t spend eternity trying to settle down to learn the ropes. His leadership style is to hit the ground running. A life without a plan is one that is doomed to fail. As a politician and public servant, he has lived this principle in every responsibility he has been given. It is this mind-set that helped him deliver a city that compared to any major city in the world. It was also this mind-set that enabled him to manage hundreds of projects at the same time without one failed project.

As governor of Kaduna State, it is expected that he will not only replicate his achievements in the FCT but will surpass the records. El-Rufai has already started making great strides in reinventing the old city of Kaduna into a modern one. There are different construction projects happening in Kaduna and young entrepreneurs are being trained and empowered. Of course, running a state is much different from being the FCT minister but the principles of success are the same. Today, Kaduna State is fast becoming Nigeria’s new investment destination. This is only a result of the leadership qualities and success principles that have differentiated this man from the rest. He has set out to astronomically grow the internally generated revenue of the State to reduce its dependence on the FGN for funds. All the signs show that Kaduna State is on course to become a viable and self-sustaining State and a place where visitors and tourists will be happy to visit. We celebrate the accidental public servant, Mallam Nasir El-Rufai and wish you the best as you make Kaduna State the best state not only in Northern Nigeria but the entire country.

‘Create structure for your business’
Timi Emowei is a full time employee and CEO of Timi.Dabiri – a shoe making company
To Top