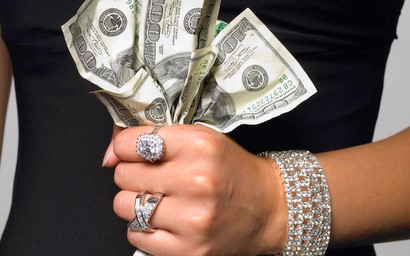 And so this Conversation has been raging for a long time now. Personally, I don’t see why. Once a woman gets into a relationship with a man who happens to have deep pockets (Hallelujah!), she goes through a number of tests – somehow or somewhere down the line – to ascertain whether or not she is in the relationship with the man for his money. Booby traps are placed, minefields mapped out, friends and relatives self-recruit to find out this sensitive bit of information. I mean, why has it become such a grave issue if women seek to ensure before they end up in a man’s house by studying his financial muscle and real time money if he has the capacity to cater for her and their eventual family? That women are branded gold diggers (platinum digger)and accused of ‘marrying him for his money’ is laughable. Was she to marry him for his stones?

There are two positions here. Women can scout out a man who has the potential to have deep pockets or at least pockets in the future and the one who already has them. The focus in society is on a woman who is dating a man who has money. If he was a church mouse, no one would give a damn. In fact, a female is safer if she is dating a poor man or a struggling man. As usual, women being their own worst enemies, lead the rumour mill and hate squad.

Let’s backtrack a bit to the Garden of Eden. I know the language of that time might be what is confusing us on what the role of the man is. It was clear by words – till the earth, subdue it – that he was/is the provider. The practices of later type men; hunters and gatherers all pointed to their role. In many cultures, women were openly attracted to and vied for men in their locale/community that had the biggest farms, largest harvests, huts muscles, war victories, battle wounds, initiation scar etc. Mothers would guide their daughters to seek such men, fathers would teach their boys the ropes to become viable suitors. Please did you hear love in any of these matters?

Fast forward to today, maybe we have reduced provision to actual farming only. So let us clear some things up; whichever way the man earns a living is his farming! In fact what actually validate a man? Is it not his ability to provide, take care of and care for his family? A woman doesn’t marry a man! Unfortunately, something happened and we have found ourselves here: More women being breadwinners. Kai ‘cake winners’ but nobody is calling the men ‘diggers’.

My problem now is that women shouldn’t even be called gold diggers anymore. Platinum diggers is most appropriate! Women are only digging for what is rightfully theirs, to be provided and cared for. Only after a full stomach in a secure place, can we talk about love.