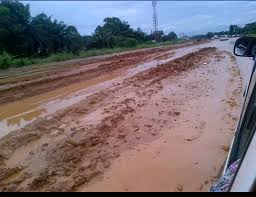 Until you take a drive through the many cities and villages across the length and breadth of Nigeria, you may not be able to truly appreciate the deplorable condition of our roads. People who primarily reside and work in the Federal Capital Territory may never be aware that in certain parts of the country, there are practically no roads. What might pass as roads which people drive on are simply old and terribly dilapidated and almost totally unpassable. There are many farming communities and villages all across Nigeria and some of these places have the capacity to feed the Nation, if the right infrastructure and social amenities are put in place.

Due to the current economic hardship and the thinning of Nigeria’s foreign exchange earnings arising from the global slump in oil prices, the government has tried to encourage young people to embrace farming as a way to get jobs and get out of poverty. The reality today is that the unemployment rate in Nigeria is at its highest compared to anytime in recent history. It ought to be obvious that farming is a viable alternative. But it doesn’t appear so because in the minds of young people, sending them to the farms is the equivalent of sending them back to the villages and extreme poverty. Some of these young people have parents who farmed to send them to schools. They also understand that the reason why their parents worked so hard in the farms was to give them a life much better than theirs. Imagine how your parents will feel or what they will say if you returned to the village and told them that you would like to be a farmer. They might just even die of cardiac arrest because they will think their son or daughter has been bewitched.

It is obvious that simply just asking young people to go into agriculture without the requisite technological and infrastructural base will only fall on deaf ears. If it likes, the government can sing the song about getting back to the farms every day. Government may even decide to spend billions of naira on paid adverts in order to convince people to return to farming. But in the end, only a few people will understand and venture into agriculture. The rest people will simply just sit down and hope that a miracle happens. You might be able to understand it better if you knew how much importance people attached to their degree certificates. As a matter of fact, many people find it totally demeaning and insulting when they are told to go into farming.

The most important issue is how the government can make farming attractive to young people. Since it is clear that government is unable to provide jobs to the growing youth population, it is not enough to simply expect the private sector to create the jobs. But government at every level ought to create necessary frameworks and structures that can support the plan.

Martins Itua is the founder/CEO of Financial Freedom Ng.

He is a banker, Financial planning and Business advisor.

He is on a mission to inspire entrepreneurs to take control of their financial future.